Warning! Read these notes after the fic. Spoilers lie ahead…

If you read ‘The Potions Master’s Nephew’ six years ago, you’d probably notice quite a difference in dialogue, plot lines etc to how it finally ended up being. In case anyone was interested I’ve kept all my old, embarrassing story notes for your viewing pleasure :) 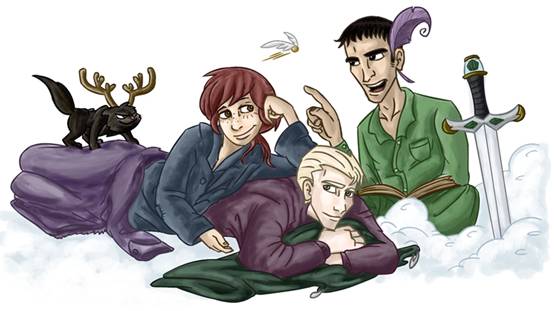 “Harry, what are you doing?” she exclaimed, as a laughing boy swung her around.

“We beat ’em Gin’!” he crowed back, throwing her into the air with effortless ease.

The girl threw her head back and laughed once more, but when she landed, it was in the arms of someone else.

A pair of dark eyes glittered back at her challengingly.

“Snape is my uncle’s name,” he warned, and brought his lips towards hers.

When they broke apart, Ginny gave a cry of alarm. She removed a lock of light blonde hair from her lover’s face.

“You know it Ginny,” he whispered, and sprinted away into the darkness.

You can see in the current chapter nine after the Quidditch match; Harry swings her around and plays out one of these snippets (it’s been reworded now though). Yeah, each snippet was supposed to happen… but the s/g kiss ended up playing out differently, along with Draco’s rescue at the end… so it was lucky it got cut anyway.

4.      The Death Eater that found them in the was supposed to be a relative of Snape’s. Yeah, I cut this because it was a long bit of boring back story in italics and it was just to explain that this Death Eater was a ‘seer’, and when he said ‘one of them will betray’ it was supposed to be a prophecy of some sort. I’d always planned Draco to go a bit crazy at the end, but why foreshadow that with a load of useless wank? :)

5.      Snape/Lily insinuations in the prologue. That’s right, this horrible cliché was thankfully cut! You can still see the remains of it though with Garwood’s auburn hair… lol, so bad…
***author edit after reading Deathly Hallows: Apparently Rowling never read fanfic and thought that Snape/Lily was a clever plot twist  =D

1.      Volde’s original plan was going to be him bathing in the pool to regain his old body so he could be ‘beautiful’, as he’d acquired vanity from his new human blood. Lol, my lovely beta reader, Mark, started laughing hysterically at this point so we decided to strengthen the plot. Yay purification process!

2.      I always planned Snape to turn back into his old self at the end of the story. That’s why I have a prologue (him before the transformation), and I’d planned to have an epilogue (about him after the transformation). He was supposed to fall into the pool at the end, with Draco thinking Severus had died trying to save him. Unknown to Draco, Snape would wash up a few minutes later in his old body, and Draco would never know that Severus and Professor Snape were one and the same. It wasn’t supposed to be a tragic ending, just sort of bitter sweet for Draco and Snape, knowing they had experienced something special and even if they didn’t want to, they’d both grown enough now to be able to embrace what they do have, and move on and upwards.

After stewing on this for a while though, and leaving it for a bit and coming back to it, Snape falling into the pool without meaning to felt like a cheap way out, a convenient plot device. If anything, after the drama was over, he should choose to use the pool, and thrust the story forward with character instead of plot.

But then, when I mentally played out the scene in my head (staring at the ceiling at 3 o’clock in the morning), when I thought about what all three of them had been through, and the sheer ferocity of Snape’s jumbled up emotions – it seemed wrong for him to change back. Why would he go back to having nothing, when he already had everything?

I rewrote the scene but it still didn’t feel right. To have him consciously choose not to use the pool didn’t gel with Severus either. Because when it all boiled down, he had been an adult, and it just seemed too ridiculous that he thought his teenage body had given him happiness. Snape’s journey was supposed to be about his personality growth, his maturity, and that should have fuck all to do with the physical form he keeps in the end.

And so I rewrote it again. He chooses to use the pool yes, but he’s using it because he’s (still!) in denial about his life and how much he’s grown to love it. He washes up as Severus because unconsciously, that’s what he wants to be. It’s not about the teenage body this time; it’s about everything that young Severus represents.

So finally… after planning seven different bloody endings… I rewrote the scene again and again and Severus agreed with me. And I think this is the reason I love fanfic so much… if the characters want happiness, no matter how ridiculous the consequences…I can give it to them (and hey, a tinge of sexiness never hurts as well).

3.      Last note by far the most awesome: In the original, original epilogue, after Draco thinks that Severus is dead, he wanders around Hogwarts in much teenage angst and discovers a mirror. He brings Ginny to it and tells her he can see Severus in it.  He’s obviously seeing Snape in the Mirror of Erised, but when Ginny looks, she just sees her and Draco’s reflection. THAT’S RIGHT! This was cut for obvious reasons XD

So that’s it with old storylines. I ended up getting a bit confused writing the last big action sequence so I drew up a map. It’s roughly based on J.K. Rowling’s map but I juggled things around to fit bits and pieces… here ‘tis: 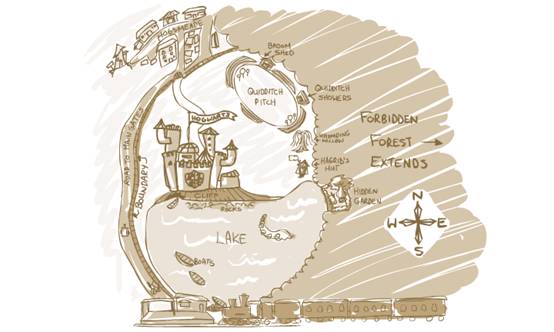 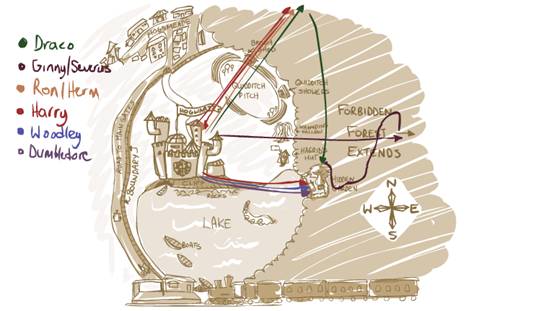